On the fourth day of Christmas my true love gave to me, an app for the Human Body

Most of us are familiar with the SAMR model (its an acronym) of technological change in education, put forward by Hamilton in 2010. In case you are not, I will try and explain it simply, using the horse and buggy as an example.

I promise I will eventually get to the Human body App, which I really did purchase today (OK, my trial ran out!) 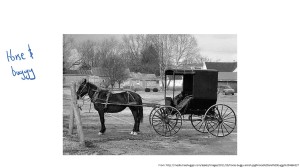 Around 100 years ago, the first steam powered buggy was invented. With this technological change, the horse was simply replaced (substituted) with the steam engine. The technology didn’t change the overall look or function. 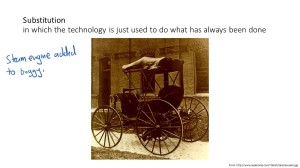 Further development of the steam powered buggy saw the engine replaced with a petroleum based combustion engine, and the body shape changed. It could go faster, and was arguably a bit more comfortable. 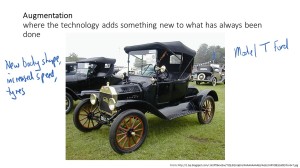 Modification – the technology changes what has always been done, adding new dimensions and taking away some redundancies.

The Australians (of course!) then developed the car further, designing the utility (or more correctly, the ute!). It could go even faster, was just as comfortable but could carry large loads. 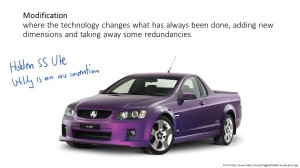 Redefinition – the learning environment is defined in a new way that transforms the education space.

Most recently we have seen the advent of driverless cars – they are often four wheel drive, can go almost anywhere and navigate their environment using GPS and neat sensors. 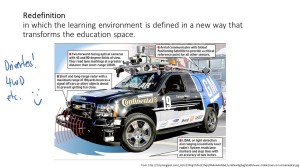 As a student of science and more recently a science teacher, I remember and love the science text book. One of the most expensive books was my human anatomical text for a third year subject – I think it was around $190 Au$. As a consequence, I wasn’t game to write on it, and certainly wouldn’t cut anything out of it. It was and is a great book, and I love showing my four year old daughter the pictures.

Just before Christmas I downloaded the trial version of the Windows 8 App “Essential Anatomy 3” from 3D4Medical – it’s currently on special for $9.95Au, and I purchased the full version today, so this really is a fourth day of Christmas present.

This is a fully interactive 3D model of the human body, with all anatomical systems available to view. It is multi-touch enabled and has a markup mode for use with a stylus (and the marked up view can be shared with others). Any system (or indeed anatomic feature or component/s) can be isolated out from the main body, with its name and use defined. A handy menu shows standard anatomic views (anterior, lateral, posterior, medial, inferior, superior), or with gestures you can move the isolated component to infinite 3D rotation positions and zoom levels. There is an audio pronunciation of each part, and a place to take you own notes. To further help you learn the parts, there is a quiz mode for various systems, with multiple choice and drag and drop question types. 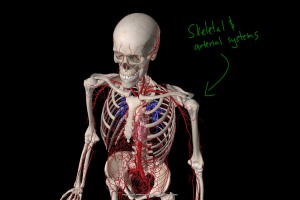 I can’t wait to use it with students in 2015. I encourage you to have a look – the trial is free after all! Just search for it on the app store.

Note: I’ve had to detour from my planned sequence for these blogs, as I have an unexpected trip interstate for a funeral – so I hope this explains the perhaps non-logical sequence!

Follow Education with a stylus on WordPress.com
Join 59 other subscribers